The Westfield lions Club was chartered in october of 1930

To become a member is easy.

For a time the club’s future seemed uncertain. Some consideration was given to become a non-affiliated club, but in 1933 a special meeting was called at which time it was decided to continue as a part of the International Association of Lions Clubs. Some new members were added and in 1934 the club sponsored the 100th anniversary celebration for the town of Westfield. The centennial was a great success, and from that time on the club has been active in the community, district and at the state level. For twenty-seven years, the club met in the Community Room of the Westfield Public Library, which is now the home of Cave Printing. In the beginning, meetings were held weekly on Thursday evenings, with Ladies (spouses) Night each month. Later, meetings were changed to the first and third Thursday evenings each month, the first being Ladies (spouses) Night. Meals were usually served by women’s organizations from various churches in the township. In the 1930’s the cost of a meal was 35 cents – 50 cents per meal. Meals are still served today by various organizations in the community.

In 1955, plans were drawn for a clubhouse to be built on land purchased from the town. With members doing about 80% of the construction work, the building was completed in 1958. In 1970, the building was enlarged to almost double the original size. A bequest from the estate of the late Lion Leland Rees provided the funding for a complete renovation of the kitchen area. Still another renovation took place in 1995 when the roof and siding were replaced. Because of its central location, the building is in use over 150 times per year for 4-H meetings, club events and meetings, reunions, wedding receptions and other events. Several local churches started with services in the building.

Community and fund-raising projects have been many and varied. The club was one of the first groups to sponsor a three-day county agricultural show, the forerunner of the Hamilton County 4-H Fair. Many Lions to this day still play various roles in the fair. They also sponsored the first fish fry ever held in the county and it is continued today as a fund raising project. The club has been involved with minstrel shows, a womanless wedding, turkey shoot, ham & bean and chili suppers, pancake day, garage sale, sale of entertainment books, raffles, and chicken & pork barbeque. One of our bigger undertakings was an Antique Show held at the high school. The show was started and managed by the late Lion David T. Peek from 1967 through 1973.

In 1980, the club celebrated its 50th anniversary as a joint venture with the Arcadia Lions, with Past International President Jim Fowler the featured speaker. Ten years later, the Club celebrated 60 years of service to the community with James Whitcomb Riley (aka Henry C. Ryder). The Club’s 65th year was commemorated with Lions and their guests enjoying remarks and comments from Past International Director Carter Everage in the Palomino Room at the Indianapolis Horse Patrol.

During the 1982-83 year, the club successfully sponsored the election of its first member as District Governor of District 25-D. Lion Robert L. Benson served in this office for the 1983-84 year. Life Member and Melvin Jones Fellow Lion Tom Hull served as the Governor’s Secretary/Treasurer. Melvin Jones Fellow Lion Rob Perkins has served as the Governor’s Cabinet Secretary. Several Lions have served in various other capacities in the District and State.

The late Lion Roy O. Hadley joined the club six months after the club was chartered and remained active until his death in 1994. To many, he was “Mr. Lion” and in his honor and memory the Roy O. Hadley Lion of the Year was established. This award is presented to the Lion who over the past year carried out Lion activities in the manner of Lion Hadley. Roy O. Hadley Community Park on the northwest corner of Main and Union Streets in Westfield was named in his honor.

The Club has been blessed by various donations over the years, but one gift stands to be remembered for years to come. The late Life Member and Melvin Jones Fellow Dr. Malcolm D. Bray and Mary gave the club an endowment of $25,000. The endowment will be used for the continuation of high school awards.

Westfield Lions look forward to rendering service in the community in the years that lie ahead, and to spreading the growth of Lionism throughout the world. 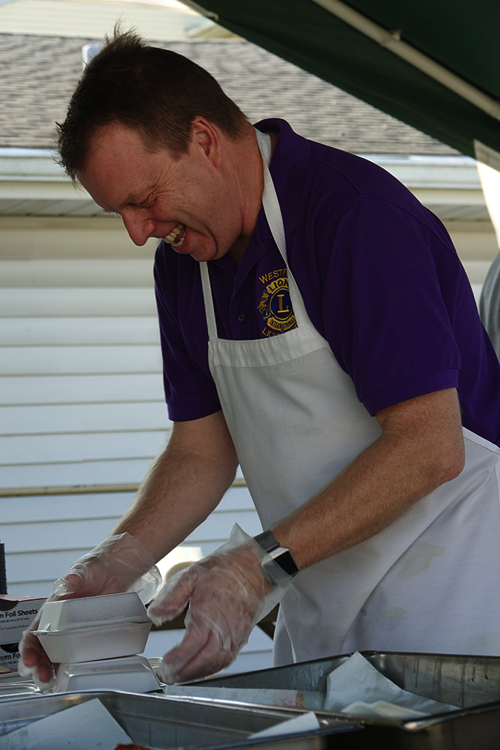